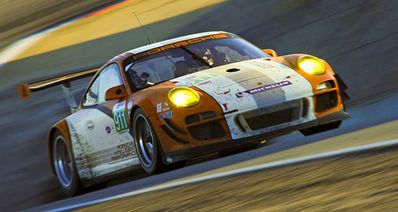 Exactly 110 years after Ferdinand Porsche developed the world’s first car with hybrid drive, the Lohner Porsche Semper Vivus, Porsche was once again taking up this visionary drive concept in production-based GT racing: During the Geneva Motor Show, a Porsche 911 GT3 R with innovative hybrid drive was making its debut, opening up a new chapter in the history of Porsche with more than 20,000 wins in 45 years scored by the extremely successful Porsche 911 in racing trim.

After succsessfull start in 2010, Porsche starts off with a further developed version of the Porsche 911 GT3 R Hybrid. Priority of the development was given to the improvement of efficiency through the targeted optimisation of hybrid components, which also resulted in a 20 percent weight reduction. Version 2.0 of the 911 GT3 R Hybrid is intended to achieve the same lap times as its predecessor but with less fuel consumption.

As a spearhead in technology and a “racing laboratory”, the 911 GT3 R Hybrid provides know-how on the subsequent use of hybrid technology in road-going sports cars. The prototype is not part of the Porsche Motorsport customer sports programme and thus not for sale. 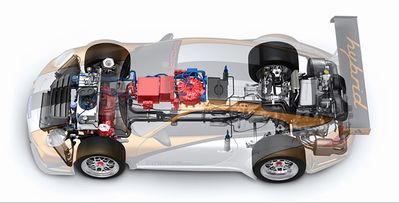 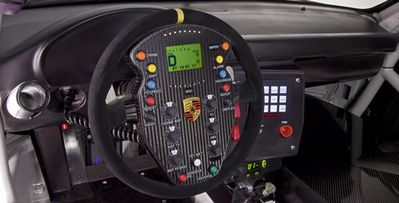 The innovative hybrid technology featured in the Porsche 911 GT3 R Hybrid has been developed especially for racing, standing out significantly in its configuration and components from conventional hybrid systems. In this case, electrical front axle drive with two electric motors developing 75 kW each supplements the 465-bhp four-litre flat-six at the rear of the GT race car. A further significant point is that instead of the usual batteries in a hybrid road car, an electrical flywheel power generator fitted in the interior next to the driver delivers energy to the electric motors.

The flywheel generator itself is an electric motor with its rotor spinning at speeds of up to 40,000 rpm, storing energy mechanically as rotation energy. The flywheel generator is charged whenever the driver applies the brakes, with the two electric motors reversing their function on the front axle and acting themselves as generators. Then, whenever necessary, that is when accelerating out of a bend or when overtaking, the driver is able to call up extra energy from the charged flywheel generator, the flywheel being slowed down electromagnetically in the generator mode and thus supplying up to 150 kW to the two electric motors at the front from its kinetic energy. This additional power is available to the driver after each charge process for approximately 6 - 8 seconds.

Energy formerly converted – and thus wasted – into heat upon every application of the brakes, is now highly efficiently converted into additional drive power.Depending on racing conditions, hybrid drive is used in this case not only for extra power, but also to save fuel. This again increases the efficiency and, accordingly, the performance of the 911 GT3 R Hybrid, for example by reducing the weight of the tank or making pitstops less frequent.

The focus on the 911 GT3 R Hybrid is to serve as a spearhead in technology and a “racing laboratory” providing know-how on the subsequent use of hybrid technology in road-going sports cars. It is a perfect example of the Porsche Intelligent Performance philosophy, a principle to be found in every Porsche: More power on less fuel, more efficiency and lower CO2 emissions – on the track and on the road.